Although still very young, Andre has exhibited a great deal of passion and determination. Once he has decided that he likes something, he'll be a loyal as a dog to his favorite bone. For about a year, it was Thomas the Train. Now, it's High School Musical.
If you don't live in the same house as a child between the ages of 5 and 15, you may not know what "High School Musical" is. It's a dramedy about two high school kids -- Gabriella Montez, who is new to the school, and Troy Bolton, one of the most popular students and star of the basketball team. Both want to sing in the school's winter musical but are too embarrassed to admit it because it goes against the school "norm". The story deals with the issues of popularity, peer/parental pressure, first love and the value of friends and family. Need I mention that this is a Disney movie? =)

High School Musical has a cult following composed of toddlers, tweens, teens and their befuddled parents. The HSM soundtrack has gone triple-platinum -- more than 3 million copies have been sold worldwide, making it the top-selling CD in 2006. By the end of 2007, more than 2,000 schools, including Ateneo Blue Rep, will have produced their own stage version of the show. Tickets to the first week of the Manila run practically sold out within the first week of release, leading the producers to extend by another week. "Breaking Free" has been bombarding us in the radio airwaves. Even McDonald's has joined the bandwagon, selling HSM lunchbags and messenger bags.

Some say that HSM's success is a result of very clever marketing and promotion. I tend to side with the others who say that the reason why it attracts the pre-teen crowd is because it is so clean and well... pretty. Give me "We're All in This Together" over "Wowowee" or "SexyBack" any time. There is something to be recommended about a movie which says that you can be whatever you want to be. As a former rebel and oftentimes bemused parent, I applaud the writers for creating a story which promotes individuality, acceptance and teamwork. Whenever Andre asks us to play the soundtrack, I just grin and crank up the volume. =) 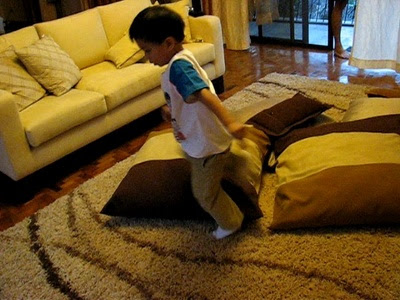