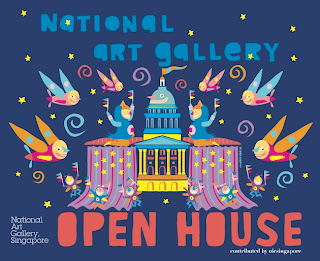 One of the great things about Singapore is the way it constantly re-invents itself while ensuring that the landmarks of the past are still there to remind its citizens of whence they came.  Go the Singapore Arts Museum and the Peranakan Museum and you'll see what I mean.  Now it's time for the historically significant City Hall and Former Supreme Court Buildings to be transformed into the new National Art Gallery,  the largest visual arts venue in Singapore. However,  before these buildings close their doors for a 3-year renovation, the general public were given a rare opportunity to wander around, "understand its colourful history, as well as gain special insights on what the future National Art Gallery will look like."  Needless to say,  we were one of the first ones through the main doors.  =) There was a veritable smorgasboard of activities catering to various audiences --  a craft-themed flea market for bargain hunters,  snack fairs,  a mobile library,  interactive kids art corners, live portrait sessions and much more. The highlight of our day was the hour-long historic guided tous.  Led by our enthusiastic volunteer guide Claude,  the little giant and I caught a rare glimpse of The Old Supreme Courts' unusual spaces & architectural details  like .... Trapdoors lead directly from the holding cells to the court docks The Old Supreme Court is the last example of Classical Architecture built on the former British colony. It is modeled after London's Old Bailey courthouse, down to the depiction of Lady Justice without a blindfold.  (As an aside, according to Wikipedia, Lady Justice was originally not blindfolded, and her “maidenly form” is supposed to guarantee her impartiality which renders the blindfold redundant) Today was a eye-opening experience.  I strongly suggest that you head on down to City Hall tomorrow.  The tours are currently fully booked but if you come early enough (doors open at 11am) and register your name on the Waiting List,  you stand an excellent chance of getting a slot.  Note:  Special tours for children (No parents allowed) are also available.

If you aren't in town this weekend,  don't despair. You can go on a self-guided tour of both City Hall and former Supreme Court buildings on Oct 16-17.  Just download the guide here.