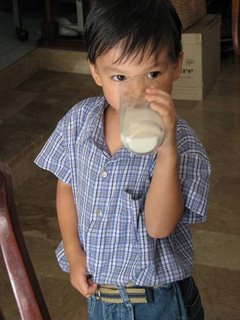 At 3 years of age, Andre is growing up so fast that it seems that every time I blink, he's sprouted another inch, learned a new phrase and taken on a new persona.
He's asserted his independence earlier than I expected. A burgeoning metrosexual, he chooses his wardrobe the night before and carefully lays it out on the bed. He has also all of a sudden decided that he's toilet trained and refuses to wear diapers while we're out of the house, reasoning that "big boys wear briefs".

He has very definite views about how things should be run. I've had a number of very interesting debates with him on why things are the way they are. Finding the right answers to his "Why's" are an increasing challenge. "Why not" is not an acceptable answer. I often wonder if I was the same way when I was a kid. If so, I must have driven my parents bonkers! =)

My baby now thinks that he is a big boy and I know that one day I will have to set him free to live his own life. In the meantime, I relish the moments when he reaches for my hand in times of joy and times of uncertainty. This is what motherhood is all about. 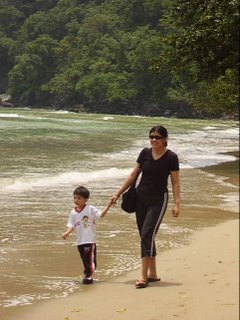