The Day My World Paused.... 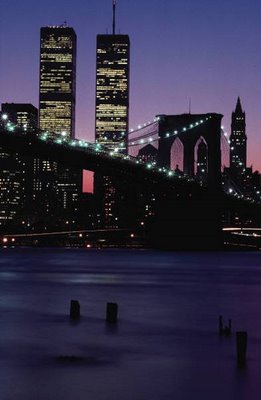 Two days from now will mark the 5th anniversary of the attacks which devasted the World Trade Centre and brought New York's Financial District to a standstill. I was there....

Just wanted to let you know that I'm alive and kicking.

I arrived in NY last night. Nainis nga ako because the plane I was on circled JFK for 45 mins as there was a thunder storm and the ground crew was scared to work while there was lightning.

Anyway, I'm staying with my cousin Michelle in Queen's. I left the apartment at around 9:15 for Manhattan. I was on my way to the TKTS booth at the World Trade Center cuz I'm super cheap and wanted to get good theatre tickets for half price. At around 10 they stopped the train at 5th Avenue. The muffled PA announcement said that there had been an "accident" at the WTC and that all trains were going to be re-routed.

I figured that since I was in the area already, I might as well do a little sight-seeing/shopping and then get the tickets at TKTS at 3pm. The first building I saw as soon as I got out of the Metro was the Museum of Modern Art. Aha, museum shop! I stepped inside and browsed among the desk calendars. About 15 mins later, this guy got on the PA to say the Museum was being evacuated. Tanong ko naman -- eh bakit? He said that two planes had crashed at the WTC. My thought was -- ok --- two commuter planes had crashed into each other.

I got out, went to a small park nearby and consulted my handy map to get my bearings... aha... St. Patrick's. This was around 10:45. I was on my way to the cathedral and was just crossing 5th Ave. when I saw all these people looking up in the sky to my right. I looked up and only then saw this huge mushroom cloud coming from the direction of the WTC. It was only then that I realized that those two planes had CRASHED into the WTC. I went into the Cathedral and cried and prayed.


It was very surreal.... people weren't panicking.. they were very quiet and walking... there were so many people walking aimlessly like zombies in the streets.... everyone was just stunned. I guess I was also stunned. I mean... I on my vacation -- so my usual reality has already been suspended for over a week. I went to Times Square (of course the TKTS booth was closed hehe)... had a nice t-bone steak at Tad's and watched the news on the big screens there. It was slowly sinking in na maybe being in downtown Manhattan might not be such a good idea after all -- I could hear the fighter planes enforcing the no-fly zone over NY. Anyway, I walked to Central Park thinking that I might be able to use the payphone in the hotels to call home. Of course, the hotels along the Park were on the tightest security and wouldn't let me in so I just decided to find my own way to Queen's.I was lucky enough to find an unused payphone at Borders (they have a sale now) and was able to call home.
I'm now at Tata's place -- calming my nerves with chips and red wine. I'll be spending the night here. It's only really sinking in how lucky I am. I don't know though when the airports are going to be reopened. I'm so scared because I'm flying AA from NY to LA on Saturday. Oh well, I'm not going to let this fear take control of my life.

I am grateful that not one of my close family and friends was hurt. It is a testament to the strength of the Tolentino and Ona family networks that within a few hours, all relatives were accounted for.   My first and thankfully ONLY real BCP in action.  I thank my cousins Tata and Fred for taking me in during those difficult days. You made me feel safe during a time of uncertainty. I thank my cousin Michelle for her courage and love of life. We have relatively the same way of dealing with stress and fear so being with her was a big comfort. Love you guys.

I was so scared (and still am) to board an airplane. It was only the thought that I had a greater chance of being hit by a bus that kept me going. =)

joh,
thanks for sharing this. what a lovely and scary story.

Imagine, history unfolding before your eyes. may pictures ka ba? I'm sure at that time, the last thing on your mind would be to take pictures.