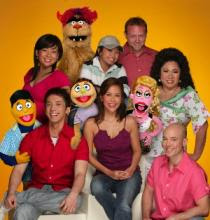 Are you still hooked on Avenue Q? Feel left out because you weren’t able to catch the first run?
If your answer is “Yes” to any of these questions, the wait is over. Avenue Q will be restaged from Dec. 13-23 at the Carlos P. Romulo Auditorium, RCBC Plaza, Makati.
Email jhorca(at)gmail(dot)com or send an SMS to 0920-901-0863 to order your tickets for the December 15 (Sat), 8pm performance. =)

Ticket prices:
Orchestra Center: P1,300
Orchestra Side: P1,100
Loge: P1,000
Balcony: P500
======================================
Could a musical be a hit if it had people and puppets sharing the same stage? Or a puppet trying to find his purpose? What if they threw in, Gary Coleman (yup , THAT Gary Coleman!) singing about the decibel level of sex? Or maybe a furry monster obsessed with internet porn? And why not some full puppet nudity? Imagine RENT mixed with SESAME STREET and you get some sense where this clever and irreverent musical comedy is coming from. AVENUE Q revolves around Princeton, a fresh-out-of-college puppet whose affections are torn between monster-next-door Kate and sexy chanteuse Lucy T. Slut. His friends help him find his purpose in life, reminding him that everything in life is only for now.
Written by Jeff Marx, Bobby Lopez and Jeff Whitty, AVENUE Q was the winner of three 2004 Tony Awards including BEST MUSICAL. It continues to play on Broadway and London's West End to SRO audiences.
Directed by Bobby Garcia and Chari Arespacochaga, AVENUE Q's exciting cast features Rachel Alejandro as Kate Monster/Lucy T. Slut, Felix Rivera as Princeton/Rod, Aiza Seguerra as Gary Coleman, Frenchie Dy as Christmas Eve, Rycharde Everley as Brian, Teenee Chan as Mrs. T and others and Joel Trinidad as Nicky/Trekkie Monster and others.
Set and Costume Design is by Mio Infante, Lighting Design by Jay Aranda, Musical Direction by IJ Garcia, and Puppet Execution by Samuel Fuentes and Marvin Choa based on Rick Lyons' original Broadway designs